In Corsica you'll find very old traces of the use of the olive-tree.
It goes back to 3400 B.C. where they found baskets with olive stones in the Scaffa-cave near St. Florent. One supposes that oil-mills have existed since about the midst of the Neolithicum, according to the principle of extorsion by turning. The oldest until then were those in Egypt( 22-27 centuries B.C.).

The olive-tree is endemic in the Corsican maquis.
They are very old time-honoured trees. Some of them are more than 2000 years old, with a height up to 20 meters, often growing on poor soil.
The history of the olive-tree fits in with the foundation of Corsican culture. Symbol of peace, mythology tells us, that it was an olive-branch brought to Noah by a dove to indicate that peace and hope would come back on earth (see also Bible: Genesis 8: 10,11).
It was the goddess Athena, who did grow the olive-branch in the soil. Athena chose the olive-branch as the most useful thing to mankind. To become a strong long living tree with edible fruits, able to provide irreplaceable oil to prepare food, soften wounds, giving force to human organism, providing light in the night.
She won the battle between her and Poseidon, to think of the most useful thing, so she got the favour of Zeus and gave her name to the town: Athens.
And what was the symbol of the Olympic Games in Athens in 2004? The olive-tree and its branch, of course!
The olive-tree is a mystic tree all over the Mediterranean area.
In Corsica its oil is also used against what they call l'occhiu, the Evil Eye. Why The Eye? Without any doubt because the look is the most common form of the Envy: invidia, of the conscious and unconscious desire.
L'occhiu can be exorcied by words, or attitude, but also by a ritual, well-known in Corsica: the incantesimu, practised by the Signadori ( see Signadori, part 4, Dorothy Carrington).
Corsica has huge areas with oliveyards, with trees up to 20 meters in height.
The olive-culture dates from Antiquity, with his specific qualities. The tree develops a harmony with his surroundings and the harvest takes place by the natural fall of the fruit, every two years, from October until the beginning of the summer. The very ripe olives are gathered, rumpled. You can already eat them, with a softer taste, less sharp. Every microregion has its own sort of olive.
In the Balagna, where the oil tradition is the strongest, without any doubt, there are trees of sometimes 2000 years, one above the other, between 10 and 450 meters in dense oliveyards, along cultivated parcels or on terrasses.
Terrible fires, so feared in Corsica, destroyed a lot of oliveyards in 1957 and in 1985.
The fruits of the sort Sabina, in the Balagna, are very rich in oil. In the Nebbiu, near St. Florent, the Biancaghja is the most important: the quantity of oil is often more than a third of the weight of the fruit. These are very old trees too, they often reach more than 14 meters in circumference. In the Tallanais, between Propriano and Sartène you find the Ghjermana, which can endure cold temperatures. They give a coloured oil.
The trees of sometimes only some centuries old, grow above each other, between 300 and 550 meters. At last in the region of Sollacaro, in the midst of the dense oil-zone between Bonifacio and Ajaccio, the beautiful glossy black Zinzala is the most important one.
Everywhere in Corsica, the olive-culture has made a restart.
In the original productive regions: Balagna, Nebbiu, Taravo, Rocca and Alta Rocca, they have always been famous for their extent and the quality of their oliveyards. The old trees are cleaned, pruned, brought into productivity. The soil is cleaned. New trees are planted by the younger people, who came to live there. The oliveyards know a rebirth and an enormous development, with an actual area of about 2000 hectares (600 in 1990).
Besides the olive-growers have joined their efforts in the SIDOC( Syndicat Interprofessionnel des Oléiculteurs Corses) to replant a.o. 1200 hectares of new parcels, 900 in Haute-Corse.
The techniques have evolved - nets are placed under the trees, so that the olives can't reach the soil, reducing the acidity and sharpness quite a lot; the quality of pressing and storage are improved.
But the respect for and the fidelity to the ancestral values are still there. To produce an oil of high quality, typical, specific for the Ile de Beauté.
You shouldn't miss the two most important yearly manifestations:
which mark the important periods of the oil-calendar of the island.
This is the opportunity to meet the growers of the island, but also to taste other local specialities and last but not least to lay in your oil-provisions. Moreover the Corsican artists make splendid pieces of art and articles for household purposes, like dishes, spoons and so on, from the olive-wood. 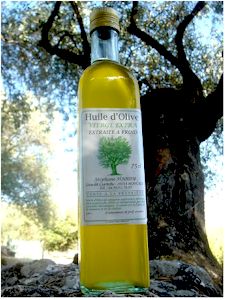 The Fiera (Fair) di l'Alivu, ia always a great success. The recognition of the Corsican oil by the label AOC (see under) played it's part of course. 55 Growers and artists were present with their stands. On the programme a.o.: information on olive-oil - demonstration of pruning olive-trees - Cucina Corsa: Corsican cooking with olive-oil - guided visits - traditional music and dance (Tutti in Piazza) - Corsican singing by I Rusulaghji.
After many years of hard work in the oil-culture, the olive-oil of Corse-Oliu di Corsica has obtained its AOC: Appellation d'Origine Contrôlée, indication of the best quality. A great satisfaction! It means the recognition of years of hard work by the growers, on the sector, that was abandoned after the Second World War, until the seventies. Six varieties have been recognized AOC: Zinzala (Corse du Sud), Ghjermana d'Alta Rocca, Sabina (Balagna), Capanaccia (Cap Corse), Ghjermana di Casinca and Curtinese (Centre Corse).
They will all have the possibility to obtain the AOC.
The typical quality of the Corsican oil is, that the fruits must be collected very ripe to give a golden oil with a soft taste, some sorts a tiny bit bitter and sharp.
You find oil with an aroma: maquis, vegetables, noisettes or almonds, as well as an aroma: straw, artichoke, courgette, myrte or honey.
The Corsican people are very fond and very proud of the natural richness of their island, the beauty of their landscapes, the specific flora and fauna, which they want to protect as much as they can. So in a lot of their famous music, nature plays a role.
I can't leave you without the text of the Lamentu di l'Alivu.
The tree is very unhappy because they will cut it down and addresses the following words to the Corsican, who is going to do it.
Poem written in 1956 by Paul Lorenzi, mayor of Sullacaro in the southern part of Corsica, but also a renowned tale-teller, this complaint has become popular thanks to Charles Foata or "Tappa". The text is from the manuscript of the poet, although with three strophe missing.
Words: Paul Lorenzi, music: Charles Foata, arrangements: Benedettu Sarocchi.
Sung by the group Sarocchi on their CD: Orígine
Yvonne Peters
August 2004
Sources:
. Articles of the Fieru di l'Alivu, Montegrosso, 2003/2004
. Méditerranée-Magazine: 1997, E.M.: L'Olive, reine de l'Ile de Beauté
. Méditerranée-Magazine : 2003, Jean Casanova/Christian Andreani:Toutes les Couleurs de l'Huile d'Olive
. Corse-Matin 24 juin 2004: Mario Grazi: L'Oliu d'Alivu a son AOC
. Corse-Matin 18 juillet ": La XVIe Fiera di l'Alivu; L'Olivier célébré à Montemaggiore
. Corse-Matin 19 juillet ": L'Année du label per A Fiera di l'Alivu
. Sarocchi: CD Orígine with: U Lamentu di l'Alivu 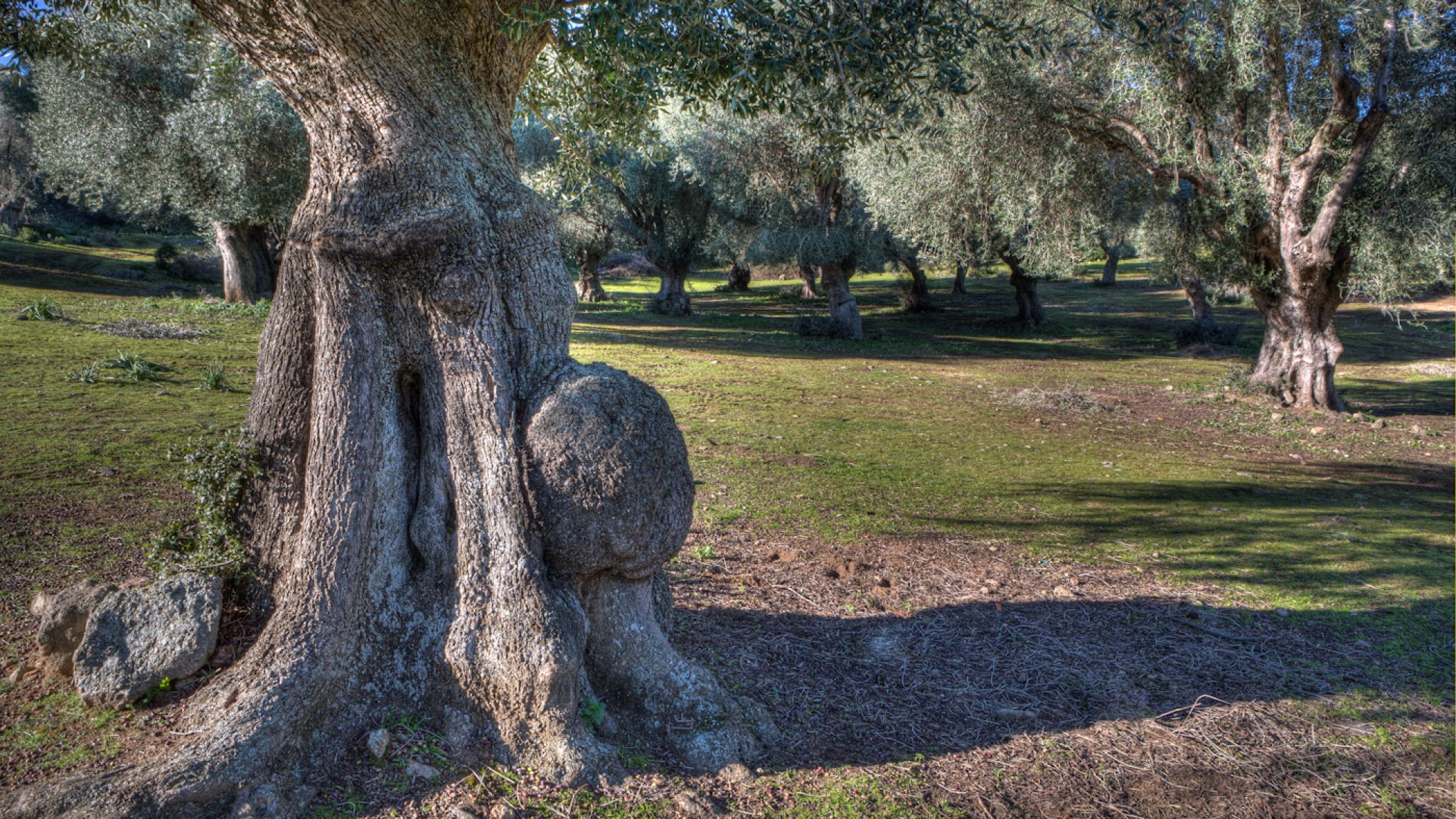