Dorothy Carrington: The Dream-hunters of Corsica

Various aspects of the mazzeri's activities are enigmatic, obscure, belonging, as they do, to the world of dream.
The signadori, on the other hand, much more numerous at the present time, perform their function openly, in "real life", in their homes, and are still be met in almost every village. They are generally regarded as antithetic to the mazzeri. They are held to represent the element of light in the Corsican occult world, while the mazzeri are shrouded in shadow.
Many, though not all, signadori cure natural illnesses. Knowledge of the medicinal properties of plants is part of the Corsican tradition. But the signadori, and they alone, can allay a malady against which plants are of no avail: their most valued function is to dispel the Evil Eye. 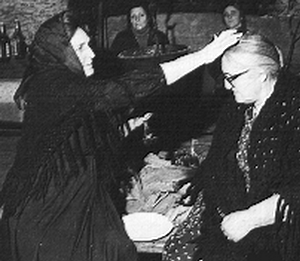 Rather than prayers, the words recited by the signadori should be termed incantations, as is indicated by a Corsican expression describing their rite, incantesimo, while the signadori may be called "incantatora". It cannot really be said that the incantations form a body of oral literature comparable to that of the voceri *) and lamenti *), for they lack literary quality.
Roccu Multedo has found incantations in Italy. Incantations are used as well in the Scottish Highlands both in their lack of adornment and their form. So the Holy Trinity is pitted against the Evil Eye.
If the incantations of the signadori seem, as a whole, to emanate from medieval Christianity, it is hardly possible to determine their date.
The slow, painful penetration of Christianity was later threatened by Vandal and Saracen invasions, which must have left deep scars on the Corsican psyche. The urgency and violence of the signadori's incantations might suggest that they derive from such heroic times.
It was the Franciscans, seeking to mitigate the harshness of island life, who propagated the cult of the Virgin Mary, so often appealed to by the signadori.
It would be imprudent to assume a Christian origin for the practices of the signadori. The Evil Eye is much older than Christianity. Their rites and prayers may well mask others, invoking forgotten pagan nature-spirits or divinities. The signadori may have been active for as long a time as the mazzeri before they Christianized their rites. The technique of divination with oil and water, widespread in the Mediterranean, is supposed to date from the Chaldeans (7th-6th c. B.C.). It may not, however, have been originally used by the signadori. One may bear in mind that the olive tree was introduced to Corsica by the Greeks of antiquity. signadori of an earlier period may have employed other substances.
Today, some throw into the water grains of wheat, or scraps of heather, or salt, reputedly magical, or melted wax or lead. Berries of the lentisk, common in the Corsican maquis, can be crushed to produce oil, the so-called "oil of the poor". Certain signadori can operate " a secca": "dry", by making the sign of the cross on the patient's forehead, or in the air, standing in front of him so as to indicate his entire physical configuration.
Observers of the Corsican scene regard the signadori as antithetical to the mazzeri. The mazzeri bring death, the signadori health; the mazzeri act surreptitiously, by night, in the maquis, the signadori openly, by day, in their homes. One can add that whereas the mazzeri act in a state of a dream, and under compulsion, the signadori act deliberately, of their own free will.
However there is overlapping of roles. Dorothy Carrington heard of a woman of the southern Sartenais who some twenty years ago practised as a mazzera by night and as a signadora by day, to rid herself, she admitted, of a sense of guilt. Guilt such as not infrequently torments the mazzeri, as has been told. 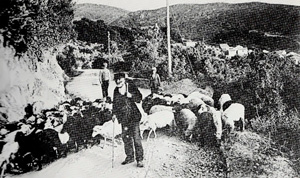 Mazzeri and signadori, it seems, once collaborated as weather-controllers. The technique of the signadori in this matter is perpetuated by the shepherds-practitioners of the Niolu. The incantations she presents are not, strangely enough, designed to bring rain, but to avert it, rain storms being more dreaded in that mountain area than drought.
Their main occupation is naturally the welfare of their livestock.
At the moment of the blessing of the flocks, water is sprinkled over the animals.But then the water is not regarded as the abode of evil spirits, because it has been blessed, so that it has a holy virtue akin to that of baptism.
Animals gone astray can be traced and recuperated by the appropriate formula, just as Saint Anthony is appealed to all over Corsica for finding lost objects, with or without the aid of the signadori. Cures can be evoked for the bites of poisonous insects: scorpions, and the zinefra, a venomous spider. Sunstroke, a prevalent mountain malady, conjunctivitis and bronchitis are all subject to the treatment of the signadori. In fact the Corsicans have inherited an arsenal of magical cures, designed to combat every ill that can befall them, natural or supernatural. But for the signadori all are supernatural, and therefore vulnerable to their rites and spells.
Only one misfortune is not susceptible to magic: against death there is no appeal.
*) voceri: songs in honour of the deceased
*) lamenti: laments for an unhappy situation, misfortune
Yvonne Peters
2004

Postscript:
There is so much more to know about these subjects, such as interesting stories told by mazzeri, finzioni, signadori, and Corsicans who met them, and comparisons with other cultures. If you are really interested, you shouldn't deprive yourself of the chance to read Dorothy Carrington's fascinating book to know more about the magico-religious aspects of Corsican culture!