Part 1: The Corsicans and the Dead 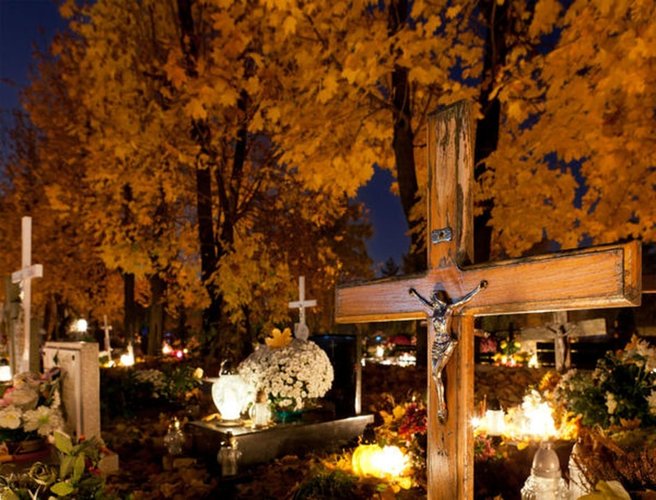 Corsican tradition is primarily concerned with death. The Corsicans' attitude to the dead is ambivalent as you may read later on. Yet they are not a particularly melancholy people. They know how to enjoy themselves with an undisguised zest on appropriate occasions: family weddings and christening parties, local festivals, carnival. The celebration of a successful election, when the partisans of the triumphant candidate let go in outbursts of gunshot, fireworks and song. But the Corsicans have inherited a religion of veneration of the dead, that of the megalithic builders, which was superimposed on an earlier insular cult of the same character; one perhaps natural to a people who attached so great value to human life.
Archaeology has shown that the dolmens and other types of megalithic sepulchres were designed for collective burial. In Corsica the statue-menhirs are explicit. It can hardly be doubted that they commemorate deceased chieftains, warriors and heroes.
The Megalithic cult of the dead lingered on in the Corsican collective unconscious, determining beliefs, attitude and customs. The un-Christian funeral rites, the voceru (song in honour of the deceased), the caracolu (ritual dance), the practice of collective burial in the arca(burial place underneath the altar), the more recent elaborate family tombs, the attention paid to the dead on All Souls' Day, the vendetta itself, which decreed that murder should avenge murder to appease the spirit of the murdered man; all these customs, as well as various popular beliefs must surely hark back to the Megalithic faith. Like a dark, rank plant of the maquis, it survived through the centuries alongside Christianity, sometimes intertwining with it, sometimes smothering it, never extirpated to this day.

On the eve of All Souls' Day the dead are thought to return to their homes. Each family rings the church bell to summon their spirits. The fires in the houses are left burning, and the doors open, to welcome the dead. Food may be laid out for them on the dining table, or on the outer rim of a window ledge. It is the custom to share these refreshments with relatives and neighbours, who by consuming them are thought to give pleasure to the dead.
In Corsica the dead reign, dictating actions and attitudes.
Venerated, they are also feared.
If their tombs are uncared for, and no food or water is prepared for them on the night of their return, if their death advice has been left unavenged, they may wreak their own vengeance by taking them to themselves.
The best defence, according to tradition, is to keep in the house palmleaves and olive branches blessed on Palm Sunday, and to suspend cutting instruments, preferably made of iron, over the beds and the entrance door, iron being thought to have a magical protective quality.
The Catholic Church has certainly tried to Cristianize the occasion. Three different orders of the Mass are prescribed; in the past all three might be celebrated.
But popular tradition has not lost its vitality. On the Eve of 2 November, lighted candles are placed by all the tombs.

The dead, if treated with due respect, can be relied upon for guidance. In the Middle Ages and even later village assemblies and tribunals were held in a burial ground, known as the arringo, with the participants grouped round a slab of stone, the petra d'arringo, laid over the tomb. The dead were trusted to inspire wise decisions.

A death in a Corsican household was until recently the occasion of spectacular traditional ceremonies that owed little to Christianity. The family assembled round the corpse, which was laid out on the dining table. Windows, shutters and doors were closed, the room was lit only by a single candle; sometimes the house was painted black. Women shrieked and wailed and tore their hair, scratched their faces with their nails, so that some of them remained disfigured for life. Widows hoped thereby to appease the spirits of their dead husbands. Meanwhile one of the women, gifted in the art of improvising verses to music, would chant a voceru, a song in honour of the deceased.
A woman to her dead husband:

The climax of these metaphors is "You were my brother", for to a Corsican the blood tie is the most sacred bond. Passed from mouth to ear and ear to mouth, these songs have been published at intervals since the latter part of the 19th century.
The voceru was very often a summons to vengeance, in which any pretence to Christian submission was precluded. The words of the voceratrice were calculated to stir the bloodthirsty instincts of the men assembled in the background, drumming the floor with the but ends of their guns.

There was even a ritual dance, the caracolu, in which the mourners linked hands and gambolled round the corpse. This dance as well as the voceru were condemned by the clergy. The caracolu seems to have been a circular movement of pre-Christian origin designed to restore a natural harmony broken by death, as was the procession known as the granitula (see article The Festival of A Santa di Niolu).
Dancing, singing, shrieking and wailing might accompany the procession of the coffin to the church and to the burial ground.

The manghjaria, the enormous traditional funeral banquet took place after a burial in the home of the deceased. All his relatives were present, many people were invited; as many priests as possible were included among the guests. These huge meals were designed not so much to feed the guests as to honour the dead.
The custom of the banquet apparently dates from prehistoric times. The archeologist François de Lanfranchi has detected traces of a funeral feast in an Iron Age burial site in the Alta Rocca.

There were many signs that give warning of death. The beating, for instance, of an invisible drum. The drum can never be located; when one hears it in the cellar, no sooner has one run downstairs than it sounds in the loft; when one climbs to the loft it sounds from below.In that house someone is doomed to die.
Another portent of death, particularly frequent, as Dorothy Carrington was told, is the mubba in the Castagnicia, a procession of phantom pigs passing the house at night.
Equally feared is the appearance outside the window of a large white owl; the so-called "bird of evil", the malaceddu. Or the hooting of an owl in a house where someone is ill.
If a birds taps at a closed window it is thought to be a spirit of a dead person, u spiritu or spirdu, seeking to communicate with his relatives; to remind them, perhaps of a duty neglected or an injury unavenged.

The most dreaded of all signs of imminent death is the phantom funeral procession, known as the Squadra d'Arozza. It may be seen in broad daylight, a procession of white-robed penitents, or figures draped in black. From a distance they appear like human beings. They are in fact the spirits of the dead, the dead of the village towards they are bound. Bearing a coffin and lighted tapers they proceed along the road and into the village with the sound of a tramping army, or with a drum beating a funeral march. When they reach the house of which one of the occupants is to die they call him by his name, but he is the only person not to hear them.
Any contact with them is dangerous. Some believe that even to meet the Squadra is to risk death.
Having summoned its victim the Squadra then goes to the village church, where it can be heard chanting the Mass for the Dead, perhaps that rending Corsican Mass sung in polyphony, the paghjella, a music said by some scholars to derive from the megalithic age, and which does indeed seem to be torn from the roots of time. The procession can afterwards be seen carrying the coffin to the cemetery.

A somewhat similar premonitory procession is known as the mumma.
The coffin contains the spirit of one who will shortly die. He may be saved if a living person has the courage to stop the procession, break open the coffin, and tear some shreds from the shroud of the phantom corpse. But this must be done before the procession crosses a stream.

As to the phenomenon mazzeri, dream-hunters who go out at night to kill an animal, in which face they recognize a person who will die in the space of time running from three days to a year, see Part 2. As to the finzioni, who presage death, see Part 3.
Part 2, Mazzeri