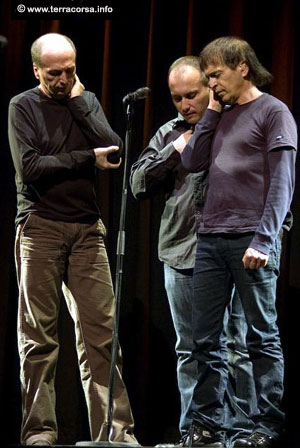 Corsican polyphony dates from the 9th century AD. Its birth was a major musical change: from music with just one voice it became music with several voices, adding a whole new dimension. Polyphony, by its very essence, favours the human voice in all its purity. Corsican polyphony expresses all man's feelings: his sorrow, his joy, his pain.
The Corsican people sing as a way of life; they hear the polyphony from their childhood sung in the church, in the bars or just at the village square. The polyphony plays an important social role from the cradle to the grave, nourished by the events of everyday life. Corsicans sing at funerals and other sad occasions, like the departure of a loved one, (lamentu), but also while working the land (tribbiera) or for revenge (voceru), to declare one's love (sirinati), and lullabies (nanne).
Corsican vocal tradition cannot easily be described or explained. Many listeners are completely captivated by the music upon first hearing it; others can't stand it.
The English historian and travel writer Dorothy Carrington, who lived and worked in Corsica from 1948 until her death in 2002 had this to say about her first encounter with this vocal tradition: "I found a trio of youngish, husky men standing together by the bar, and their song held the noisy drinkers spellbound. The sound was like none I had ever heard before; yet I recognised it as one I had always longed to hear. The three strong voices rose and fell in a sequence of deliberate discords; this rich harsh clashing music was poignant, far, than any wailing solos I had heard, even the voceru, so remote and rending that it seemed to issue from the birthpangs of the world."


Jean-Francois Bernardini:
"The Corsicans did not invent polyphony, but they did invent the oral tradition, a specific way to tell something, to emphasise polyphony. It was the first music I heard when I grew up. I heard it in my village, in our house, where the men often came to sing with my father. Polyphony is a monumental dimension in the Corsican oral tradition and is without doubt the most beautiful cathedral we have".


The polyphonic song harmoniously combines three registers of voice:
a secunda, which begins, gives the pitch and carries the main melody;

u bassu, which follows it, accompanies it and supports it;

a terza, the highest tone, which enriches the chant, adding ornamental notes.
Traditionally, polyphony is sung by three men. Nowadays, women also sing polyphony (e.g. Isulatine, Jacky Micaelli). The singers form a circle, their arms often placed on the shoulder of the neighbour. The hand on the ear has several reasons, the main one being to close the ear to avoid hearing the other voices and to hear better one's own voice.
The paghjella is performed by accompanied soloists, like Ghjuvan Paulu Poletti, Antone Ciosi, Petru Guelfucci.
Many of the polyphonic songs have an oral tradition and were never noted.
Sometimes a monodic song becomes a Paghjella. During the Victoire de la Musique in 1995 the disc Tribbiera by Petru Guerfucci won the award for the best album of the year in the section Traditional Music.
Guelfucci describes that the titllesong Tribbiera was originally a monodic song, but he arranged it for polyphonic singing.
His idea to do this was that he wanted the music itself to convey the idea of working together.
Many Corsican groups now enjoy big fame, also beyond the bounderies of Corsica: I Muvrini, A Filetta, Barbara Furtuna, Voci di Corsica, Les Nouvelles Polyphonies Corses, Soledonna, I Chjami Aghjalesi, Isulatine, Tavagna, Caramusa.
The Corsican polyphony includes sacred and secular forms. Secular polyphony includes forms such as paghjella, terzetti, madrigale, lamentu and nanne. Sacred polyphony is sometimes used in the Catholic mass and there are many traditional polyphonic mass chants. At concerts, the Miserere or the Kyrie are frequently sung. Some more examples of the sacred polyphonic chant, also taken from the Mass, are Agnus Dei, Gloria, and Sanctus. O Salutaris, and 'Diu vi salve Regina' (a hymn to the Virgin Mary and the national anthem) are other examples.
The case of the Chjami è Rispondi is also very original. This improvised poetic joust requires from the performers a exceptional virtuosity. It often tells of daily events, can be very humourous and remains very prized by the public.
We can still attend it in Casamaccioli in the Niolo , during the A SANTA DI NIOLU fair in the month of september.

In the 1960s traditional Corsican music seemed doomed to fade away. The 1970s however, brought revival and retraditionalization not only in Corsica, but throughout Europe. In Corsica, the riacquistu was closely allied to the nationalist movement. The youth of Corsica felt a sort of renewal in the air, the spirit of Dylan's 'Blowing in the wind'. Lots of young men and women, studying or making a living for themselves at the continent, decided to return to Corsica, and became active in the revivalist movement.

Cialambella
The cialambella (cialamedda in the south of Corsica, cialambella or cialamella in the north), is one of the most simple wind-instruments. It was already known in the Antiquity, Greek shepherds called the instrument aulos (latin=calamus)
It arrived in Corsica not much later and through the centuries the body has been made of the wood of the figtree, the olive,-or palmtree; the reed was kept simple, punched by a piece of red-hot metal.
The cialambella can also be made with a double reed of which one, without the small holes, produces a continuous sound.
In fact, this is the principle of the bagpipe, one tube produces the melody, the other one "the bourdon", the humming. 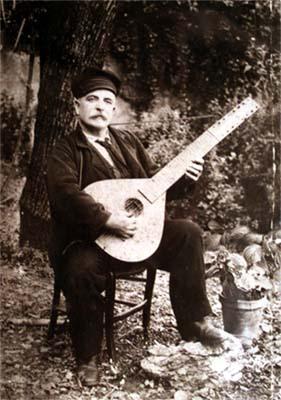 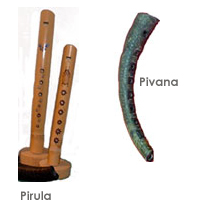 Pirula
A flute made of reed, according with the theme of the Lamenti

Pivana
A flute made of goat horn